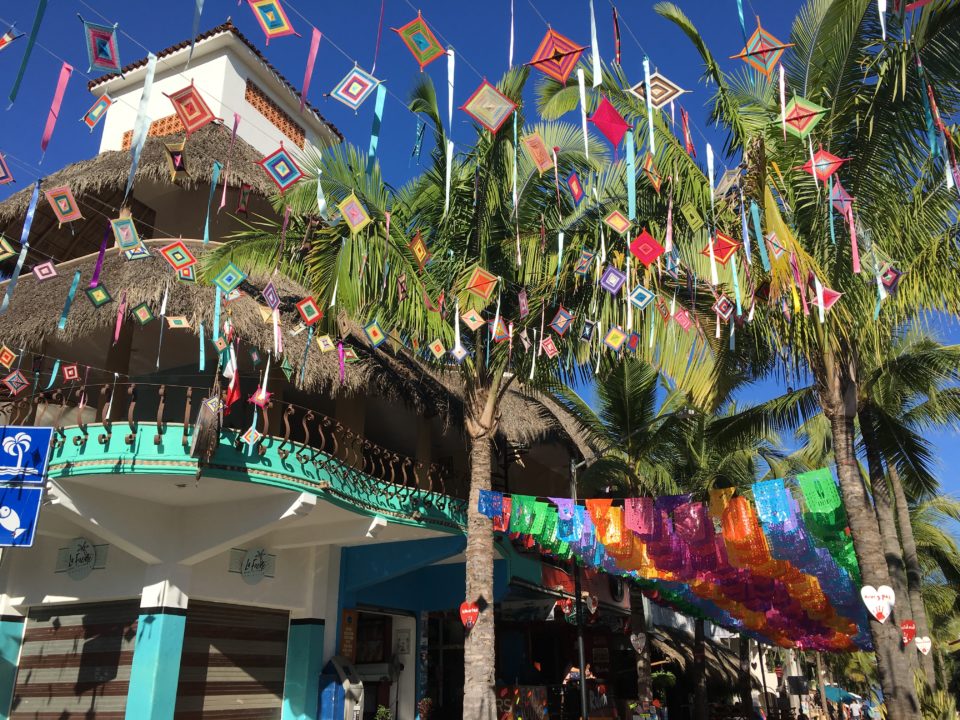 If you’re not already aware of it, Sayulita is one of the hottest destinations in Mexico. With a mix of both traditional Mexican and contemporary world-culture, it’s a place that calls to many.

One of the most important days in Sayulita is Dia de los Muertos or Day of the Dead. During Day of the Dead celebrations, families remember loved ones who have passed, visit gravesites and create altars brimming with flowers, photos of the deceased, their favorite foods, and personal effects.

For Sayulita’s 9th Dia de los Muertos in 2019, organizers replaced the colorful plastic flags which hang over various streets in the town with thousands of beautiful, handmade Ojos de Dios (God’s Eyes). The Ojos, spiritual objects of great importance to the Huichol Indians (or Virarika) of Nayarit and Jalisco, are thought to confer protection and are also viewed as a physical representation of the magical opening through which God and man can see each other and communicate.

The Ojos are made by winding colorful yarn around two sticks whose ends represent both the cardinal directions (north, south, east and west), as well as the natural elements of earth, air, fire, and water. As with all ceremonial items made by the Huichols, colors are important, as each is identified with a particular god or sacred object.

The Ojos de Dios will be featured again during Sayulita’s 10th Dia de los Muertos festivities in 2020, with planners and participants hoping to set a Guinness World Record for most Ojos ever placed on display.

If you’re headed towards Sayulita in November and would like to like to learn more about the origins of Dia de los Muertos before you arrive, check out the following links:

• Day Of The Dead: National Museum Of Mexican Art

And remember, for key times like Dia de los Muertos, Sayulita’s hotels, rooms for rent, and even Sayulita Luxury Transportation’s SUVs all fill up quickly. Save yourself disappointment by booking both your accommodation and your ride to-and-from the airport well in advance of your travel dates!

Where your vacation starts at the airport.