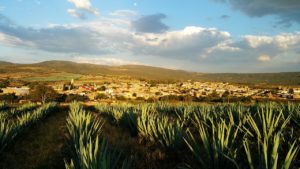 Tequila: The Soul of Mexico in a Bottle

A Brief History of Tequila
The history of tequila is a colorful one, including a Hatfield and McCoy-like feud between the first two mass producers of the spirit. But if we dial up the Wayback machine to find the origin of both name of the town as well as the drink, we find both inextricably linked to the ancient volcano which silently watches over the city as it has for over 200,000 years.

The volcano is crucial to the story of Tequila because ash blasted out of its core helped create the lush soil that allowed indigenous Aztec (or Nahua) tribes within the area to flourish. One tribe who farmed the area closest to what we now know as the Tequila, was known as the Tecuexe. One theory regarding the origin of the name of the town holds that the indigenous name for the area was Tecuallan, which simply evolved into the word Tequila over time.

An alternate theory involves yet another product of the volcanic eruptions, namely obsidian, a mostly-black, glasslike stone that’s formed when lava cools without crystallizing. Incredibly hard yet able to be chipped or polished into many forms, it produces cutting edges which are many times sharper than today’s equivalents. Nahua Indians used obsidian to make blades for knives, axes, spears, and arrowheads. Collectively, the tools were known as tecatlis, with the person making them known as a Tecuilo. It’s theorized that the settlement around the volcano, was eventually called Tecuila and finally Tequila, in reference to both the objects and the skilled artisans who made them.

Amazing Agave
Regardless of how the town got its name, the agave plant is the undisputed source of the drink tequila. Agave, a family of over 200 varieties of spiny, succulents, includes 159 species found only in Mexico. Agave was of particular importance to the Nahua and actually worshipped -- not just because of its long lifespan (some varieties live up to 100 years) -- but also because so many parts of the plants were used in everyday life. Seeds were ground into flour. Roots were boiled and crushed for medicines. Leaves were pummeled to make rope and paper. Sharp tines at the end of the leaves were transformed into sewing and tattoo needles.

Depending upon the species of agave, flowering stalks or piña (the pineapple-like base of the plant) yielded aguamiel, a sort of honey water that could be drunk on its own or fermented into pulque, a foamy alcoholic drink used in Aztec rituals and medicine-making.

After the Spanish Conquest of Mexico in the 1500s, pulque remained a key drink for both indigenous and invading cultures, but as the Spaniards favored clearer spirits, they began to experiment with production methods that could create a drink more similar to the wine and brandy that they were used to consuming at home. Agave piñas were substituted for grapes, their hearts roasted and crushed, and the resulting liquid distilled into a smoky drink called mezcal wine.

The drink, already a hit in Mexico and Spain in the 1700s, was introduced to the United States in the mid-1800s during the Mexican American War. Three hundred years later, the US is the largest importer of tequila, and the product so important to the Mexican economy, that it is now protected under intellectual property law.

The Downside of Tequila’s Success: An Opportunity For Change?
It takes approximately seven kilograms of agave to produce a single litre of tequila. In 2019, tequila producers brewed up an astounding 351.7 million litres of the stuff, then proceeded to export over 70 per cent of it to 51 countries worldwide.

All told, the industry chalked up a staggering $5 billion in sales, but with demand only increasing, and with China’s doors now open for business, do Mexico’s tequila producers have a plan to ensure a self-sustaining future for the plants, and industry?

Sustainability is a must for agave, as unlike the three to six months needed to grow the rye, wheat or barley used to create vodka, beer and whiskey, agave piñas don’t accumulate enough of the sugars needed to create a flavorful, full-bodied tequila until they are almost 10 years old.

To keep up with global demand and to make both the growing and harvesting of agave as easy as possible, the plants are now grown in huge monoculture plantations using chemically-intensive processes. And while photos showing unending rows of agave play well on social media, if the crop is not organically-grown, it’s likely to contain residues from the pesticides and fertilizers that are used on it during its long maturation period.

As well, because the Mexican government’s Denomination of Origin rules require tequila to be made with just one species of agave, namely the Blue Weber Agave, many tequileros (tequila makers) have chosen to propagate their crop via cloning instead of by sprouting it from seed. Cloning, unfortunately, decreases the genetic diversity of the plants, which could prove disastrous should disease strike.

With the livelihood of an entire country at stake, a handful of agaveros (agave farmers) have begun to wrestle control back from the large tequila companies, by allowing a small percentage of their crops to mature, flower and propagate naturally. The movement occurred just in time to save the lesser long-nosed bat, one of the most important agave pollinators. While originally endangered, after 30 years of diligent work by everyone from agaveros and biologists, to tequileros and bartenders, the lesser long-nosed bat has now been removed from the endangered species list; and Mexico’s Blue Weber Agaves are slowly gaining back their genetic heartiness.

The waste product, known as bagasse, is highly acidic and not easily used as compost. Luckily, Mexican ingenuity has come to the rescue, with scientists and entrepreneurs working together to reduce bagasse waste by using it to create everything from bioethanol to bricks, and most recently, nutritious, high-fiber flour.

What’s Next for Tequila?
Tequila, long considered a gift from the gods, has shone its golden light on Mexico from pre-hispanic times until today. But according to Greek mythology, every gift given by the gods is actually a contract, and in order to continue to profit from the gift, the receiver must give something in return. In tequila’s case, what's being asked, is for the industry to provide an elevated level of stewardship.

Fortunately, more and more tequila producers are investing in small-batch operations that create bat-friendly, organic, additive-free, and even kosher versions of spirit and producing it with less waste as well. Visitors to Tequila can help accelerate positive change in the industry by patronizing brands that demonstrate a serious commitment to these efforts.

CUSTOM TOURS
Sayulita Luxury Transportation invites you to be part of that change, by booking one of our newly-created, custom tours of Tequila. We’ll introduce you to some of the proud new (and old) players making a difference, and of course, make sure you get a chance to sample their wares!

Artisanal Tequila Tour
Sample tequila made the new, old-fashioned way, and learn how taste and quality predominate when you keep the environment top-of-mind.

Tequila Tasting
If you can’t make it to the Tour, you can still sample craft tequila via a custom tasting. Highly-educated tequila sommeliers will assist you in selecting tasting flights that enable you to make comparisons between regions, producers, etc. Tastings can include Mezcal, Raicilla, and Sotol as well.

MORE THINGS TO DO IN TEQUILA
A single day in Tequila is not enough to experience the town’s museums, restaurants, cantinas and market, let alone the hidden gems we’ve listed below. Plan to stay more than a day, and we guarantee you won’t be disappointed!

La Danza de los Voladores
Recognized by UNESCO as an Intangible Cultural Heritage of Mexico, and performed against a backdrop of the La Purisima Temple in downtown Tequila, the ceremony of the Flying Dancers or Birdmen of Tequila allows viewers a tiny glimpse into the area’s indigenous history. Legend has it that the air dance originated as a ceremony designed to get the attention of the rain god during a severe drought. The god was impressed and brought the rain just as the last dancer descended from on high. Head over to tequila’s Plaza Principal, and we know you’ll be impressed as well!

Available Via Day Trip…
Guachimontones Pyramids
While Merida and Mexico City possess magnificent square pyramids, Guachimontones, just 1.5 hours south of Tequila, boasts the world’s only circular pyramids. Hike the steep site, explore the ruins, then reward yourself with lunch at a restaurant along the shores of Lake La Vega in Teuchitlan.

Volcán de Tequila
Choose your difficulty level, then take a guided tour up Mexico’s fourth-largest, and Tequila’s long-extinct volcano. With its pinnacle towering 2,920m above sea level, the volcano is home to a myriad of rare plant and animal species found across a variety of biomes. Pack a jacket. You’ll need it when you get to the top!

NO TIME TO TROMP OFF TO TEQUILA?
Punta Mita’s Four Seasons Resort offers a new two-hour "The Best Tequila Is The One You Blend" workshop that helps visitors understand the tequila-making process and identify, analyze and understand the aromas and tasting notes of various tequilas.

At the end of the workshop, participants can choose their favorite tequilas from different barrels and create a one-of-a-kind blend of their own! Each custom concoction is then bottled, sealed with wax, signed, numbered and registered.